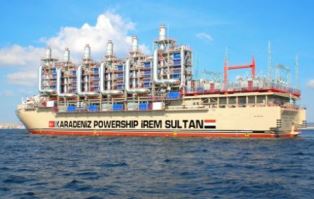 Turkey plans to send a floating power station to Gaza to provide vital electricity to the troubled region.

Turkish Energy Minister Taner Yildiz said that the electricity generating vessel would be sent as soon as Gaza‘s port facilities had been upgraded.

Yildiz met this week Palestinian Energy Minister Omar Kittaneh and afterwards told a press conference in Ankara: “The Palestinians have contacted the Israelis concerning the dispatching of the platform and there has been no adverse reaction from the Israeli side.”

Power Engineering International reports that the floating power plant will be provided by Turkish company Karadeniz Holding, which is the only shipbuilder in the world to make such vessels, which can operate both on liquid fuels as well as natural gas.

Karadeniz ” which also operates traditional power plants in Turkey ” has five operational power ships and another eight under construction, which will bring the total capacity of the fleet to around 2000 MW.

Gaza regularly suffers blackouts and its only power plant is routinely switched off for weeks at a time because of fuel shortages.