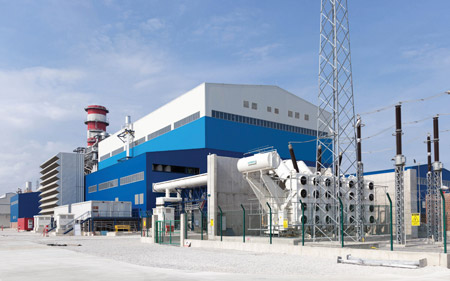 How two power plants are providing the Turkish electricity sector with flexible and eco-friendly energy.

During the last two decades, the Turkish electricity market has been growing rapidly, with an average annual growth rate of more than 6 per cent.

According to forecasts from the International Energy Agency, it is expected that electricity consumption will double by 2020. Unless major changes in electricity imports take place, this will require at least doubling the installed generation capacity within a decade, which constitutes a tremendous challenge.

Since the Turkish electricity market faces strong liberalization and privatization, most of the additions will be provided by independent power producers (IPPs) which face a fully competitive electricity market with all its uncertainties regarding fuel and electricity prices.

The dynamic power plant market in Turkey calls for flexible and eco-friendly power generation facilities that are cost-efficient at the same time, so that they are right at the top in the merit order. Siemens is offering its state-of-the-art H-class technology in the Turkish market and placed the first 50 Hz H-class plant outside Germany with Cengiz Enerji with a new 600 MW CCPP in Samsun at the Black Sea coast, followed by Enerjisa’s Bandirma II project.

The Turkish energy sector is characterized by an ongoing process of liberalization and privatization with a strong political target to reduce the account deficit, mainly driven by tremendous imports of oil and gas.

On the one hand, the privatization process in the energy sector is in full swing, with the distribution networks already sold to private investors, while the sale of several older power plants – hydro and thermal – is ongoing. Since all new and privatized power plants are exposed to the liberalized merchant market with volatile electricity prices, operating flexibility is an important feature to be available on demand.

On the other hand, Turkey relies heavily on primary energy imports due to limited own resources. Turkey imports more than 40 bcm of natural gas, and roughly half of this amount is used for electricity generation. It is the declared policy of the Turkish government to reduce this dependency on gas imports, which is a key driver for highly efficient power plants.

Based on these characteristics, the electricity market demands power plant solutions which fulfil both requirements at the same time: operate at the highest efficiency and flexibility. The Siemens H class gas turbine and power plant technology are designed to fulfil these requirements in the best way.

Siemens, and its partner and customer Cengiz Enerji Sanayi ve Ticaret AS, have completed the combined-cycle power plant Samsun in Turkey two months ahead of the agreed deadline in a record construction time of 23 months. With its SGT5-8000H gas turbine as the key component and an installed capacity of 600 MW, this plant reaches an efficiency level of around 61 percent, which is a new record for the 50 Hz market.

This makes Samsun the most efficient fossil fuel-fired power plant not only in Turkey, but also on the entire 50 Hz power plant market at present. The new natural gas fired CCPP in Samsun meets Cengiz Enerji’s requirements for a flexible power plant with short startup times and fast load capability, and will be the perfect complement to the operator’s power plant fleet.

Siemens supplied the power island for the Samsun single-shaft plant, consisting of an SGT5-8000H gas turbine, an SST5-5000 model steam turbine, an SGen5-3000W generator, the electrical system and the SPPA-T3000 I&C system.

The company also supplied a Benson heat recovery steam generator and the auxiliary and ancillary systems for the plant. Siemens also concluded a long-term service contract for the main components. Cengiz was responsible for construction and installation work at the plant.

The Samsun power plant is extremely flexible and is designed for 200 starts per year. After a downtime of six hours, the plant can power up to full load in less than 30 minutes. Furthermore, it reacts very quickly to grid fluctuations and can adapt its output by more than 35 MW per minute to meet the changing power requirements.

Lothar Balling, head of project management in the Siemens Power and Gas Division, says: “We are proud to have set a new record on the 50 Hz market with this power plant and its efficiency level of almost 61 per cent.”

On the southern coast of the Sea of Marmara, near the city of Bandirma in the Balikesir province, another natural gas-fired plant is currently being built.

Enerjisa, a joint venture of Sabanci Holding and E.ON, awarded Siemens the turnkey contract to construct the plant.

Bandirma II will be the second power plant in Turkey to be powered by an SGT5-8000H gas turbine.

This type of turbine, which has proven itself in commercial operation since 2011, has now clocked up more than 130,000 equivalent operating hours at an availability of more than 97 per cent. Upon completion in the spring of 2016, this plant will have an installed capacity of around 600 MW.

Siemens’ scope comprises not only the turnkey construction of the single-shaft plant, but also the supply of the following main components: an SGT5-8000H gas turbine, a SST5-5000 steam turbine and an SGen5- 3000 W water-cooled generator, along with the entire electrical system, a 400 kV high-voltage switchgear installation and the SPPA-T3000 instrumentation and control system.

The scope also includes a Benson-type heat recovery steam generator manufactured by NEM and the auxiliary and ancillary systems.

The dynamic power plant market in Turkey calls for flexible and environmentally friendly power generation units that are able to come online quickly and reliably, and are cost-efficient at the same time, so that they are right at the top in the merit order.

These new plants in Turkey will fully fulfill these requirements.