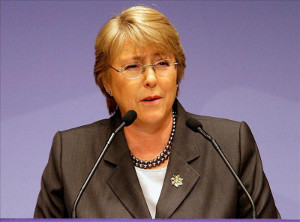 Bachelet highlighted the “urgent need of promoting projects” in a country that currently has insufficient infrastructure to face the growth in demand for energy, according to a report by Noticias Financieras.

In her speech, Bachelet pledged to increase installed capacity during her presidential term via non-conventional renewables (1200 MW), hydro (865 MW) and thermo (622 MW) projects.

Another priority was to decongest the country’s transmission systems by 2017, and to push for interconnection between Chile’s central SIC and northern SING grids.

In her speech, Bachelet was reinforcing her government’s energy agenda which it announced in May.

EDP to accelerate green hydrogen deployment with a 1.5GW pledge