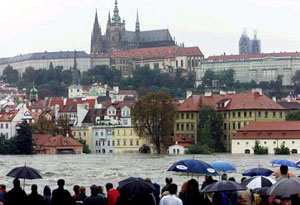 Czech utility CEZ shuttered a 720 MW coal-fired power plant north of Prague and Austria’s Verbund closed four of its 10 hydropower stations on the Danube river amid central Europe’s worst flooding in a decade on Tuesday.

CEZ was forced to shut its Melnik 2 and Melnik 3 units and limit supplies to four northern districts due to safety concerns after declaring a state of emergency as waters from the Elbe river overflowed its banks.

Verbund had to use reservoir power stations and thermal plants to offset lost output, so power supply was not an issue, a spokeswoman said.