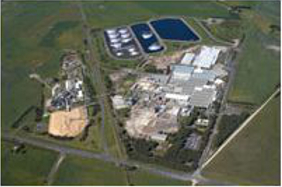 Millicent Mill in Mount Gambier in the southeast of South Australia, which produces 85,0000 tonnes of tissue paper each year for the New Zealand and Australia markets, has been upgraded with a new 20 MWe combined heat and power plant.

The $33 million cogeneration plant uses gas to power a turbine, replacing an aging gas-fired boiler, and the system now supplies all of the mill’s steam requirements and more than 90% of its electrical load as well as 85% of the drying heat for the lineà‚ that makes Kleenex Cottonelle and Viva products.

It has provided significant savings in energy costs as well as reducing the carbon footprint of the factory by some 80,000 tonnes of carbon dioxide emissions annually.

Millicent Mill manager Scott Whicker explained: ‘We have to be smarter and better than our local and global competitors given the cost of labour, energy and transport to get raw materials to the mill and finished product to market.’

The facility was commissioned in the second half of 2013 and Kimberly-Clark Australia has reduced total carbon emissions by 24% since 2011.