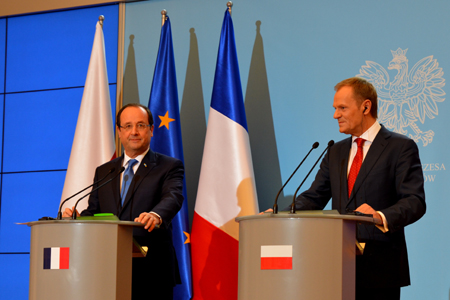 French President Francois Hollande and Polish Prime Minister Donald Tusk have put forward a proposal for a European energy community to counter the dependence of some European countries on Russian gas.

The AFP news agency reports that the proposal was made to hold such a summit in June.

Hollande said in a joint statement that the purpose was to make “Europe more independent, more coherent, more cooperative in its energy policy”. France and Poland were putting forward a plan with six points to convince all members of the European Union to head towards “the European energy community”, he said.

Tusk said that the move could only benefit the European Union which, he said was in a “critical situation” in view of the crisis in Ukraine. The European Union could no longer be so dependent on Russian gas, he added.

”The EU has to invest in infrastructure which would connect all of its members to a network of gas pipelines, and also had to push forward with new sources of energy,” he added.

Tusk also raised the possibility of the EU buying liquefied gas from the US or from Australia, and added that countries along the Mediterranean basin could also be important suppliers.