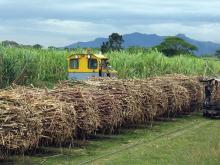 The Fiji Sugar Corporation (FSC) has commissioned a cogeneration system at its Labasa Mill on the island.

A 10 MWe project, the system is fired on bagasse waste produced from the sugar processing plant. With around 4 MWe used on site, excess electrical capacity will be sold to the Fiji Electricity Authority (FEA) grid.
à‚

The cogeneration system cost of $17 million has been financed by Fiji Development Bank.

Commenting on the project, Divisional Planning Officer (DPO) North, Alipate Bolalevu reportedly said: ‘It will be something that will benefit the North because the mill will produce electricity, not only during crushing season, but also sell power to Fiji Electricity Authority during off-season.’

Fiji Sugar Corporation Executive Chairman Abdul Khan added that alongside the 10 MW project in Labasa, a 40 MW plant for Rarawai Mill is also planned on the basis of a power purchase agreement with the FEA.