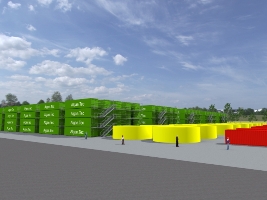 Macquarie Generation, one of Australia‘s biggest power company, has signed a deal with Algae.Tec Limited (ASX: AEB) for an algae carbon capture and biofuels production facility to be located adjacent to its Bayswater coal-fired power station.

Macquarie Generation, which is owned by the New South Wales (NSW) government, has signed an agreement to site aan Algae.Tec facility next to Bayswater, which is located in the Hunter Valley, near Sydney.

Once the facility is operation, Bayswater’s carbon dioxide (CO2) emissions will be fed into the enclosed algae growth system, rather released to the atmosphere.

The algae will feed on this ‘waste’ CO2, and once harvested, the resulting algal oil will be converted to biodiesel and hydrogenated to ‘grade A’ jet fuel.

Commenting on the deal, Russell Skelton, Macquarie’s Generation CEO and managing director said: “Carbon is now our single largest cost. This technology should reduce our carbon output, reduce our carbon bill, and at the same time improve our bottom line.”

The Bayswater plant has an installed capacity of 2640 MW and consumes around 7.5 million tonnes of coal per year, delivering electricity to eastern Australia – from the states of South Australia to Queensland.

Baker Hughes to use mixed-salt process for carbon capture