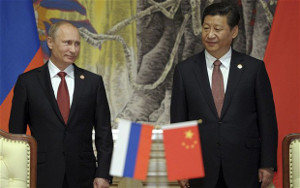 Russia and China have signed a 30-year natural gas deal.

Estimated to be worth $400 billion, the deal between Russian gas giant Gazprom and China’s biggest oil company, China National Petroleum Corporation, was signed this week in a ceremony attended by Russian president Vladimir Putin and Chinese president Xi Jinping.

Under the terms of the agreement, from 2018 China will receive around 38 billion cubic metres of natural gas per year, covering around one-fifth of the nation’s annual gas demand.  A new $55 billion pipeline will be built from Russia’s Siberian gas fields to China’s coastal consumption centres.

The parties declined to name the final price China will pay for the gas.

China’s gas demand is projected to grow by 14 per cent per year through 2030 and to reach 420 billion cubic metres by 2020. The nation has been seeking to reduce its dependence on coal power, and its gas policy calls for growing use of natural gas to fuel its road vehicles, trains and ships.

The deal is seen as bad for Europe, with analysts predicting a rise in EU gas prices and increased pressure on Member States to find alternative gas supplies. However, it is viewed as good for Asia, as Russia will have cheap gas left over to sell in other Asian markets, lowering prices in the region.