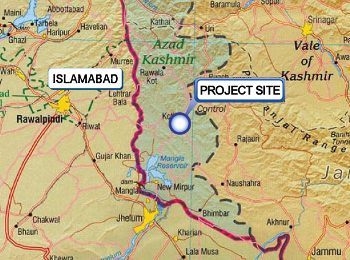 Pakistan’s third privately-developed hydropower project is underway with the award of a contract for owner’s engineer.

Construction began in January on the 100 MW run-of-river Gulpur hydropower project, located on the Poonch River in the Kotli district of Azad Kashmir, and is scheduled to finish in mid-2018. When completed, the plant is expected to generate an average of 465 GWh per year, or enough power for 50,000 households.

The project is being undertaken by independent power producer Mira Power Ltd, a Pakistani subsidiary of Korea South-East Power Co (KOSEP), under the aegis of Pakistan’s Water and Power Development Authority.

Under the terms of the $350m contract announced this week, US-based engineering and construction firm MWH Global is to serve as the owner’s engineer.

“We are keen to have MWH on this project,” said Kiran Fatima, senior manager, project development and corporate finance at Mira Power. “Their initial excellent input in basic design finalization has not only resolved the critical environmental and resettlement issues but has also reduced the cost of the project.” In August Mira Power held a compensation disbursement ceremony in Kotli where cheques were distributed to parties affected by the project.

“Pakistan has a long history of embracing hydropower as a clean, renewable form of energy for its residents and we’re proud to have helped meet their evolving needs over the last 50 years,” said Joseph Adams, president of energy and industry at MWH. “As the country seeks additional energy sources to meet growing needs, we look forward to supporting these two key projects by deploying a diverse set of industry-leading experts.”