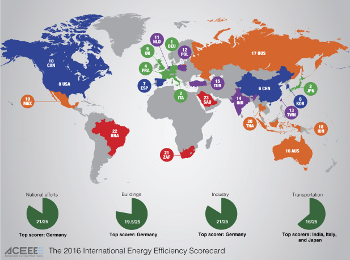 Germany has emerged as the world leader in energy efficiency once again while eight nations joined the rankings for the first time, according to a report released this week by the US-based American Council for an Energy-Efficient Economy (ACEEE).

Tied for second place are Japan and Italy, followed by France. The UK holds the number four slot although the ACEEE said its ranking does not reflect ‘energy-related government changes in 2016’.

The report awarded points out of a possible 100 for 35 policy and performance metrics in buildings, industry, transportation and overall national energy efficiency efforts.