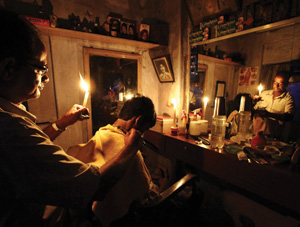 21 million people in the state Andhra Pradesh in India have been left without power as a result of a government decision to split the state.

Technology companies such as Google and Microsoft have been impacted over the last four days by a strike by workers who have withdrawn their services in protest against the decision.

Striking workers have shuttered power plants and impeded distribution, extending blackouts in response to what is seen as a government move aimed at helping the party win more seats at the next election.

The situation could escalate as there is potential for the strike to disrupt the power supply to an area the size of Spain, which holds over 1.2 billion people.

Bloomberg reports that talks with the labour unions of state power plants are ongoing to prevent a repeat of last year’s collapse of the northern power grid that left an area inhabited by almost half of the population without electricity.

Authorities may have to take the option of isolating Andhra Pradesh from the southern grid, in order to prevent a recurrence.