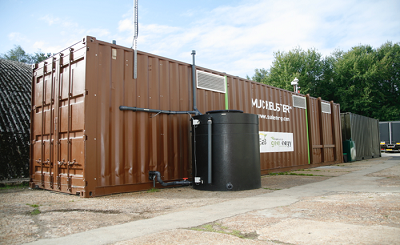 A crowdfunding campaign is aiming to bring power to a remote Indian village through a containerized waste-to-energy solution.

Through a partnership with the Andhra Pradesh state government and the University of California at Berkeley, the company is participating in the Berkeley-Andhra Smart Village Project, which focuses on getting transformational technologies to the state’s poor and remote communities.

With its crowdfunding site SEaB Energy is looking to raise $120,000, or one-third of the funds needed to prepare, transport and install two of its systems at the site in the village of Mori.

The company also plans to train and certify village residents to install, operate and maintain the systems.

Sandra Sassow, SEaB Energy’s co-founder and CEO, said: “There could be as many as 50 million rural households in India without electricity but prohibitive infrastructure costs could mean that these people may never be connected to the grid.

“We want to raise this issue through social media which, if successful, will not only greatly help the villagers that will be participate in this first trial, but millions of others across India and in other developing nations”.

“Our ‘power-in-a-box’ technology means that the villagers can now generate a source of green electricity from their food and organic waste, for which there is a ready supply, without the need for expensive infrastructure.”

The company said its technology is already installed at major US corporations, Portugal’s largest supermarket chain and a NHS hospital in the UK.

The crowdfunding page is here.

Portuguese retail outlet supplied by ‘power in a box’