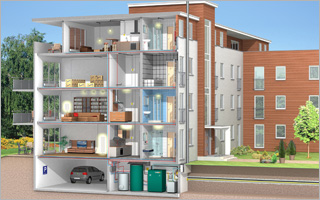 In its latest forecast, consultancy Transparency Market Research found that the sector is likely to grow at a CAGR of 4.38% between 2014 and 2024, with rising energy prices and growing awareness of CHP in developing nations driving improved prospects for system installations worldwide.

A strong existing CHP network will further drive the market, the report found, and current sales depend on it to a significant extent.

The top eight companies currently hold 53% of the market.

CHP systems are in greatest demand for industrial applications, which account for the largest market share but offer the least scope for growth compared to the commercial and residential segments. In these areas, the US, Japan and Germany are the most promising markets according to TMR.

Europe, with easily available natural gas from Russia, holds the lionà¢€â„¢s share of the CHP installation market at 68%, with demand seen to grow in Germany, Poland, Belgium, Italy and the Netherlands. The Asia Pacific region is viewed as the biggest opportunity market.

TMR predicts that the value chain of the global CHP installation market will remain à¢€Å“highly complicatedà¢€ during the forecast period. à¢€Å“The implementation of stringent emission control norms worldwide has compelled leading enterprises to adopt forward integration. Such strategies could have an adverse impact on the market’s growth trajectory,à¢€ the firm said. à¢€Å“Combined with this, the high cost incurred on installing CHP systems is also inhibiting the large-scale proliferation of CHP installations. Nevertheless, increasing scope in the residential and commercial sectors is expected to boost the prospects for the market in the near future.à¢€