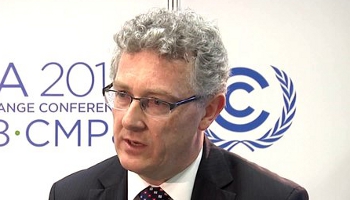 Globally, 12 large”scale integrated carbon capture and storage (CCS) projects are preventing 25 million tonnes a year (Mtpa) of greenhouse gases from reaching the atmosphere. A further eight under construction will increase the total to 38 Mtpa by 2016 ” the equivalent of taking up to 18 million cars off European roads.

A report from the Global CCS Institute has highlighted again the importance of the technology in combating climate change, however proponents are warning that barriers to its adoption must be removed.

Releasing The Global Status of CCS: 2013 report in Seoul, South Korea, Global CCS Institute CEO Brad Page called for a renewed focus on the significance of CCS in the portfolio of low”carbon technologies required to deal with human”caused climate change.

“Urgent action is required to limit, alleviate and, where possible, reverse the damaging effects of the rise in temperature of our planet,” Mr Page said. “Crucially, this means employing, without favour, appropriate climate change mitigation technologies ” and this includes CCS.”

Notwithstanding recent strong progress, with four additional projects becoming operational since 2012 ” an increase of 50 per cent in one year ” Mr Page said momentum was too slow if CCS was to play its full part in tackling climate change at lowest cost.

“Seventy per cent of CCS proponents agree that policy uncertainty is a major risk to their project. Indeed, ongoing uncertainty about the timing, nature, extent and durability of emissions reduction policies is limiting investment in CCS and stalling its development and deployment. This must be addressed.”

Mr Page said this was evidenced by slow project progression, almost no new projects outside China, and a strong development bias toward projects with additional revenue opportunities, like enhanced oil recovery.

“Of concern is that no new projects were identified in Europe, nor are any under construction,” he said. “Accordingly, what we need globally are technology neutral policies that provide sufficient incentives for projects to develop robust long-term business cases and attract the private funding needed to create market conditions conducive to broad-based CCS deployment.

“Fossil fuels are useful, plentiful and affordable, so of course we will continue to use them,” Professor Allen said. “To exploit this resource to the full, without further damaging the planet, we need CCS.

“The latest IPCC report confirms that, to have a good chance of limiting global warming to 2oC, we need to limit the total amount of carbon we release into the atmosphere to less than one trillion tonnes, more than half of which has been released already. Existing reserves would take us over this limit ” and we keep finding more.

“We will eventually need large”scale CCS ” no two ways about it. And it would be far safer, and cheaper, to deploy this technology steadily as we approach the limit than to deploy it in a panic in 30 years’ time.”

Since the Institute’s 2012 report, the number of large”scale integrated CCS projects around the world has reduced from 75 to 65; five have been cancelled, one downscaled and seven put on hold; and three new projects identified ” one each in Brazil, China and Saudi Arabia.

The annual global status of CCS report provides a comprehensive overview of CCS policy, legal and regulatory developments, technologies and large”scale demonstration projects, authoritative analysis, insights and recommendations for accelerating the technology. It is available to download from globalccsinstitute.com.