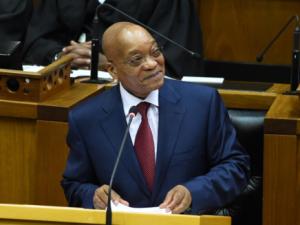 The South African President, Jacob Zuma (pictured), says the country is leaving the dark days of load shedding and power generation uncertainty behind it, as he launched an important pumped hydro plant in Natal on Wednesday.

Zuma said that developments at Eskom’s Ingula Power Station Unit 4, in Ladysmith, KwaZulu-Natal in the Little Drakensberg, is a further sign of progress in the country’s aims at energy security.

Spanning across the KwaZulu Natal and the Free State Provinces, the Ingula pumped hydro plant commenced construction in 2006, with all four units expected to come online in 2017.

Comprised of four units, the plant will produce a cumulative 1,332MW, with each unit generating 333MW.

“This time last year, the country was faced by serious energy shortages. Our people were frustrated by load shedding and the future looked bleak,” Zuma said.

“We set out to change the situation, and we are making tremendous progress. Eskom has been forging ahead to ensure improved maintenance and also to fast-track the building of infrastructure that will give us much-needed energy security. By 2021, Eskom’s new build programme will add close to 9000 MW of new capacity to power South Africa’s economic growth and development.”

“On completion, the power station will feed more than 1300 MW to South Africa’s power system. This will bring electricity power and a new quality of life to approximately five hundred thousand homes which is similar to powering a municipality the size of Nelson Mandela Bay Metropolitan city,” he said.