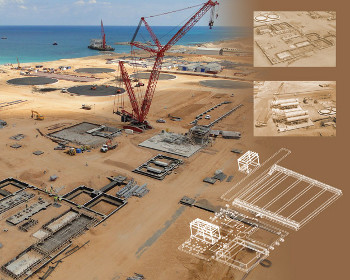 South Korean firms Hyundai and Doosan have reportedly halted construction work on a power plant in Libya due to local unrest.

The 1400 MW oil-fired Al Khalij plant (pictured) near the town of Sirte was begun in 2007 and was scheduled to come online this year, but construction has been interrupted first by the 2011 war and subsequently by factional fighting in the region, with just one 175 MW unit online to date.

The delay is “only temporary,” the plant’s managing director Abu Bakr Makhyoune told the Reuters news service. “[The companies] had orders from the South Korean government to pull out because of the security situation in Libya.”

Around 570 of Hyundai’s foreign workers and 382 from Doosan left the region over the weekend. They have been replaced by 52 Libyan engineers who will run the plant, Makhyoune said.

“We had many meetings to reassure [Hyundai and Doosan], but they said they had orders from their government,” said a Sirte city council spokesman, Mohamed al-Amyel.

Fighting has been heavy over the past month in Tripoli, Libya’s capital, and in the city of Benghazi in the east. à‚