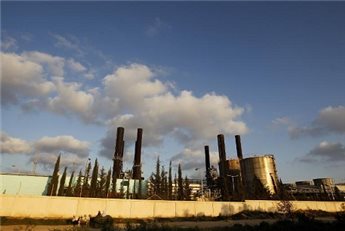 The Gaza Strip‘s sole power plant has been repaired after Israeli shelling took it offline in late July.

Walid Sayel, CEO of the Gaza Electricity Distribution Corporation (GEDCo), was quoted as saying on Saturday that the diesel-fired plant (pictured, in a 2012 photo) is now ready to come online pending fuel delivery.

At the time the plant went offline, a spokesman for Gaza’s energy authority said it would take at least a year to fix as the turbines, fuel tanks and control room were all “burned”.

At a press briefing, Sayel said he was awaiting a response from Palestinian President Mahmoud Abbas’s office on providing fuel, and that he expected to have news about a fuel shipment from either his government or that of Qatar within 48 hours. No further updates have been provided as of this writing.

Qatar had previously donated three months’ worth of fuel to Gaza as well as $10m earmarked for fuel purchase.

Until it went offline, the plant supplied 40-60 MW. However, long-standing fuel shortages meant that residents routinely suffered blackouts of up to 12 hours per day.

At present, in addition to the diesel plant’s output, 120 MW of electricity is imported from Israel and 28 MW from Egypt, leaving a shortfall of around 80-90 MW given the 360 MW of power analysts say is needed for the region.

Turkey is awaiting the necessary permits in order to send a 100 MW floating power plant to Gaza, but Sayel said Israel’s approval is “impossible” and instead called on Turkey to subsidize the Gaza plant.

However, in mid-August Turkish energy minister Taner Yildiz said: “The Palestinians have contacted the Israelis concerning the dispatching of the platform and there has been no adverse reaction from the Israeli side.”