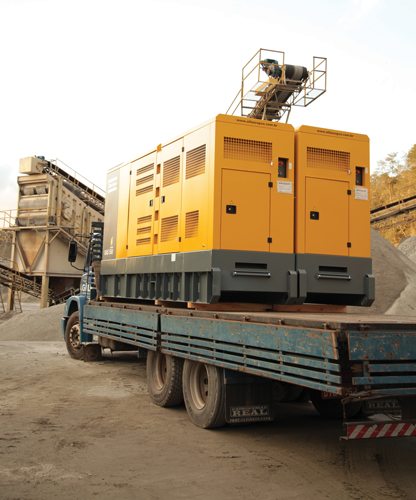 Atlas Copco has launched its QEC and QAS 330-550 generator ranges.

The QEC container generator range, described by the company as “1 MW of power in a 20-foot [six-metre] container”, is a prime and critical standby power solution aimed at the rental power, mining, and oil and gas industries.

In addition, the firm’s top rental generator, the QAS 305-550 line, is now available in 50 Hz and 60 Hz versions, with a new slimmer design that allows two generators to be placed side by side on a truck for ease of transport.

Ben van Hove, the firm’s marketing director for portable power, told PEi that its containerized generators are designed on a ‘slide-in’ concept, with the complete engine alternator assembly mounted on a platform which can be slid out of the container for servicing. “That’s unique, and very much appreciated by rental companies who really count the total cost of ownership, including service time,” Van Hove said. He added that the generators have a number of options that can either be mounted initially or added later on.

“In the big power nodes, we obviously use controls that have power management systems on board to optimize generator use, especially when used in parallel with other generators to work in the most optimal working points for the best fuel economy,” he continued.

In addition, some models have a variable-speed cooling fan which, according to Van Hove, reduces the energy consumed in cooling and makes the unit “up to 10 per cent more fuel-efficient than our competitors”.

While 40 per cent of Atlas Copco’s business is currently in Europe, that percentage is declining, Van Hove said – but “not because Europe has been declining, but because we are growing more outside it”.

The company’s next-biggest market is the US, he said, followed by the Middle East and Africa.

“We’ve been growing fastest in North America over the past year and a half,” he said, “and this will continue. The market is still doing very well – and, as it’s large by nature, growth of 5 per cent there means a lot of money.”

He said the firm sees “the whole of Africa and the Middle East” as a potential growth market. In Africa, he said, “although mining is down there are still other opportunities” such as South Africa’s power crisis.

“We haven’t really seen a slowdown yet because the oil price is down,” he added. “There will be a bigger impact in Venezuela and Canada, where exploration costs are high, but we haven’t seen slowdown in the Middle East or in Africa. So we’re optimistic that the situation might not affect our business too much at all.”

In Asia, he said Atlas Copco is “quite excited about developments” in Southeast Asia and South Korea, two ‘hot spots’ for the firm.

The exception is India, where although the nation is a “huge market” and the company produces a generator for construction and mining applications there, it is “not into the general generator or standby business”.