Paul Frey of Sharper Shape talks to Diarmaid Williams, highlighting the company’s efforts to take its technology ‘beyond the line of sight’ and explaining why the Trump administration augurs well for the drone sector

Although not a drone manufacturer, Sharper Shape provides one of the world’s most advanced aerial sensor systems with technology that powers the automatic collection and analysis of unmanned aerial inspection data.

Its roots can be traced back to Finland in the 1990s, and a major European academic project investigating automated methods for analysing LiDAR point cloud data for utility right of way and vegetation management efforts.

“The project was run by the Finnish Geospatial Research Institute,” says vice-president of sales, Paul Frey. “They had some problems with vegetation encroachment on electric utility power lines and the Finnish government wanted to solve that problem, so they worked with the Institute to develop that.

By 2011, the project had created the world’s first small drones with LiDAR scanning capabilities and by June of 2013, Sharper Shape had indeed commercialized this research and started business operations in Finland.

“We then received permission from the Civil Aviation Authority in Finland to start flying our devices beyond line of sight. That’s really the first time to our knowledge that was permitted for commercial applications. Once we started that with Finnish utilities, there was quite a bit of success and we began to move beyond Finland, acquiring contracts in India, China and Peru, and we started reaching into the US.”

As the Federal Aviation Administration (FAA) created the framework for commercial unmanned aerial systems (UAS) applications in the US, Sharper Shape re-formed as a privately held American company and moved its headquarters to Grand Forks, North Dakota, a drone hub. It continues to operate its international technical research and development facility in Espoo, Finland.

Almost immediately after opening its US offices, Sharper Shape developed a consortium deal with Edison Electric Institute, where seven of the EEI member utilities sponsored work Sharper Shape was involved in, with the aim of achieving beyond visual line of sight (BVLOS) in the US for all electric utilities.

‘Beyond line of sight’ refers to long distance drone inspections of electric transmission and distribution systems that will optimize the efficiencies and effectiveness of UAS based inspections, and if accepted will be the biggest enabler to UAS inspection of electric infrastructure in the US.

“The achievement of BVLOS in the US has been a challenge,” says Frey. “The regulatory issue here with the FAA has pretty much prevented close to all commercial operations from flying beyond visual line of sight in the US. There has been a couple of experiments in the US, but even that has been limited.”

In 2016 the FAA started to create a regulatory framework for commercial UAS operations, and they created a new set of unmanned aviation regulations called Part 107. The Part 107 rules went into effect August 29th 2016 and includes the ability to request waivers from some of the most restrictive regulations.

Sharper Shape was one of the first companies to put in a request for a waiver. It is currently working to revise its waiver application based on FAA feedback, and this time will be adding some additional technology for its drones to address the FAA concerns in the attempt to win favour.

The Trump administration’s attitude to the technology bodes well for the industry, according to Frey. The company is currently in contact with more than 30 US electric utilities interested in its services, and Frey expects a dramatic increase of its US business in 2018.

“There’s going to be a huge burst in activity because the current administration is definitely interested in clearing any roadblocks to commercial applications. In October, Trump issued a memo to US Transportation Secretary Elaine Chao basically stating that he wants drone opportunities in the US to accelerate as quickly and as safely as possible.

“As part of that, on November 9, the FAA issued a request to commercial drone operators in the US to put in proposals for the FAA UAS Integration Pilot Program. Basically all of the operators had to partner with a government entity, and that government entity would become the lead applicant for the project to integrate drones into the national aerospace.

“I believe there are 150 to 200 applicants who have completed the process, and the FAA is going to likely authorise between 5 and 10 of these integration projects.”

Sharper Shape with lead applicant the Sinew Management Group (part of the Three Affiliated Tribes) has applied to be part of the FAA UAS Integration Pilot Program. Sharper Shape believes it has presented a strong application and hopes to be selected.

Frey predicts good things for the UAS industry, and it appears already apparent in North America, if certain indicators are taken into account. “At a recent conference I attended, I found it interesting that there was a patent attorney who did a presentation on the number of US patents versus all other country patents in the drone stakes”

“Up until about 2013, applications for drone technology patents in the US far outstripped the rest of the world. Then, US drone applications started to decline, and among others the Chinese applications rose significantly. If you look at the current data, the US is now outstripped by many nations. It won’t change unless there is a change in the appetite for commercial drone services, and the administration is keen on that.”

The progress on UAS regulations in the US is set to have a knock-on effect on the company’s efforts in other regions, according to Frey.

“We have been pursuing some opportunities going on in South America, and are evaluating and bidding on projects there. Interestingly enough, a lot of these countries look to the US and have similar drone regulations. So as the US starts to open things up, I expect to see similar results in South America.”

Although they provide a versatile service capable of working in many areas across the utility space, Sharper Shape’s main thrust is in the inspection of overhead power lines. They offer two types of service: Automatic Detailed Inspection and Consolidated Linear Inspection.

“CLI uses a very large drone, a very capable and heavy-lifting hexacopter which we call the Sharper A6.

“That drone can capture many streams of data – oblique and nadir imagery, HD video, LiDAR, UV and infra-red data, all in one consolidated stream of data.

“It means basically being able to correlate all the data with exact location, space and time. We’re able to very cogently provide that data to the end user and we do that as a complete end to end service. The vegetation management service we provide is still one of our stronger elements, as it’s where we started out originally, and have developed a lot of experience in it.”

The second application the company offers involves DJI or Pixhawk-based drones with the ability to perform an automatic detailed inspection (ADI).

Sharper Shape uses LiDAR to create a 3-dimensional map of the utilities’ assets and then creates an autonomous flight plan that can be uploaded to any DJI or Pixhawk autopilot. All the UAS pilot has to do is prepare the drone, hit start, and then the drone takes off and flies in very close proximity to the lines or towers, capturing all of the required photographic imagery.

“We can do standard photos or infrared photos or both. Once we have captured that data we can upload that to our software. Our user interface is one of the best out there. It allows the user to understand what perspective each of the images was taken from. That’s captured and presented in a very coherent fashion to the end user.”

The company has also developed a sophisticated level of automatic issue detection. Once the data is captured it can be uploaded to the cloud, several Cloud-based applications are run against the data. Those apps can automatically perform an analysis determining whether there are issues to be addressed or not. Drone Software As A Service, which the company has trademarked, is part of the ADI service, and suits end users with a preference to do their own flying with their own drones.

Currently transmission and distribution inspection is the area where Sharper Shape is most active, solar farm inspections and sock line pulling are becoming more frequent. One of their most high-profile jobs involved one of America’s largest utility.

“We were asked by them to perform line work. It involved stringing sock or pull lines. These sock lines enable pulling the heavy transmission lines into the pulleys when you are constructing new 765 kV towers. They had asked a couple of other companies to try to demonstrate this and we were the first to successfully do it.”

The task was performed with a large hexacopter with heavy lift capability. The drone strung the pull lines through sets of transmission tower insulators. This allowed an intermediary line to be pulled and ultimately the heavy transmission line to be pulled through. A fatality, the loss of a helicopter pilot undertaking a similar task, had prompted the utility to look for a drone alternative.

Growing recognition of the company’s attributes also saw Sharper Shape being sought out to assist authorities with coping with the increasingly prevalent superstorms afflicting the US.

In August, the company signed a long-term contract for emergency response with another major US utility and was called in to provide its services following Hurricane Harvey. In relation to that experience, the company is preparing a specific emergency response solution that has become highly demanded by the utilities due to increased hurricane activities.

The company also received a positive report on its activities the previous year when the Electric Power Research Institute visited Sharper Shape in Finland. The Institute’s researchers observed Sharper Shape’s BVLOS flights and the whole end to end detailed and consolidated inspection solutions.. Their EPRI representative concluded that the company’s capabilities were very advanced.

“For automatic detailed inspection, we stop at each tower and fly a specific scanning pattern.

“We get a lot of photos of each of the towers, and the process is highly automated so there is little pilot intervention.”

As the drone industry continues to prosper, there has been some concern about the lack of experienced or licensed drone pilots on the ground. So far, this hasn’t been a major problem for Sharper Shape, thanks in large part to a key partnership.

“We have a group of pilots in Finland, and one company pilot on board here in the US. But we also have a strong partnership with another company called Sky Scopes, and we have done a number of operations with them. They have a group of half a dozen pilots that can fly these missions and are very experienced in unmanned aircraft operations.

“We have been able to get the talent we need to this point. There is explosive growth in this industry and I hope we have these problems.”

Another crucial topic for the UAS industry is the security of the data it is capturing. The company’s credentials on this subject are impressive.

“Our chief executive, Ilkka Hiidenheimo, comes originally from the cybersecurity world. He created a company called Stonesoft, developing it from scratch before selling it to Intel.

Understanding the role of AI in future energy markets 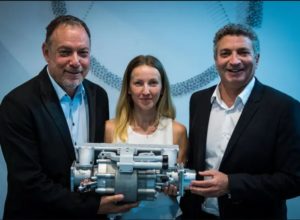