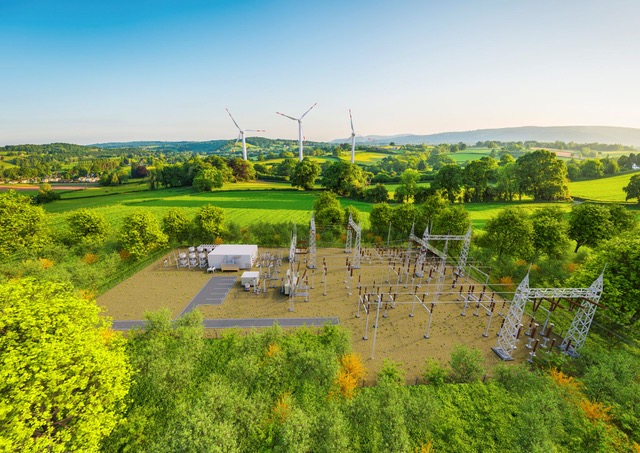 As the deadlines set out in the Paris Agreement and European Green Deal loom closer, the pace of transformation within the energy sectors intensifies.

Around the globe, power grid operators and power producers face new and increasing challenges to meet the surging demands with reliable power.

The problems that the operators face come from a multitude of directions, including market liberalization, the emerging decarbonized, distributed, and digitalized energy landscape.

In many regions, particularly where there is increased demand or rapid growth in renewable generation, the current network infrastructure cannot meet the requirements that decentralized energy systems with unregulated load flows and the liberalized electricity markets are increasingly making.

This stretching of the existing grid infrastructure has two effects, both detrimental to the grid’s performance. The first is that by overloading existing transmission lines, thermal overloads can occur.

Then there is also an increasing number of cases where the frequency and voltage approach or even exceed the allowable limits.

According to the International Energy Agency , world gross electricity production was 3.9 per cent higher in 2018 than the previous year. Year on year, global electricity production has grown continuously since 1974. While energy demand is growing significantly, driven by electrification and sector coupling, the generation landscape shifting with fossil and nuclear power is replaced by renewable energy sources.

The transmission grid was constructed decades ago to manage electricity from conventional and nuclear-fuelled plants located near major load centers.

In recent years that has changed with increasing amounts of decentralized renewable generating assets coming online in areas where the grid was never designed to handle high and volatile loads. This results in many lines under increasing pressure to carry heavy loads while other networks are now not fully utilized as they used to be.

The role of renewables
The increasing penetration levels of renewable power affects one of the critical parameters of the power grid, namely reactive power, causing stability issues.

Most developed countries have set renewable energy targets backed by policy directives to achieve these targets. In the early stages of renewable energy, these assets had little impact on grid stability as they could be either connected or disconnected because of their low penetration level.

Catch up on the latest renewables news

However, as the amount has increased over the years, that tactic is no longer viable as to do so would adversely affect the power system stability and reliability.

The reactive power in a network will influence the voltage levels. While the frequency is stable across the network, voltages across the system are determined by the prevailing real and reactive power supply and demand.

If the network does not have suitable reactive power injections at the right locations, the voltage profile of the transmission system will exceed statutory planning and operational limits.

If there are no appropriate reactive power sources available locally and reactive power compensation devices cannot be used, the bottlenecks are corrected by voltage-related redispatch.

Ensuring a stable and reliable grid
This increased renewable generation also causes local and regional pipeline congestion, such as transmission lines that must absorb electricity from offshore wind farms and move the electricity to remote load centres.

To maintain the system stability, the n-1 criterion must be observed; that is, the failure of a line must not lead to system failure, with the current always able to travel by at least one alternative way. In these cases, the affected network elements are relieved by current-related redispatch.

For all grid operators, the goal is to ensure that they operate a stable and reliable system, but this needs to be balanced against costs.

To achieve this, there needs to be a standard for an acceptable reliability level that can assure, with a high probability, that the voltage and frequency remain within an acceptable range.

That standard is the n-1 criteria. This always states that a system can tolerate an unexpected failure or outage of a single system component. This principle has achieved acceptable results over the past decades.

This limit is calculated for each network. The actual figures vary from 50 to 70 per cent constant operation below the thermal threshold to ensure that the load in the transmission line does not exceed parameters.

With this limit, you guarantee that whenever a fault or outage occurs, then the load in the remaining transmission line should not exceed more than 100 per cent of the thermal limit.

With the increased penetration of intermittent renewable generation and complexity to transmit this energy in dynamic situations that cannot be predicted, transmission lines can often violate this n-1 criterion. To maintain grid stability, it is vital that operators can manage this growing problem.

Avoiding the rising cost of redispatch
The additional costs incurred in redispatch measures through compensatory payments passed through network usage charges from the TSOs to the end customers, making electricity more expensive.

According to the Federal Network Agency, the German regulatory office for electricity and gas, the share of network charges in the price of electricity for household customers in Germany rose from an average of 5.75 ct/kWh to 7.31 ct/kWh between 2011 and 2017. The economic damage caused by redispatch is enormous, with total costs of around €18 billion in 2017.

An effective way of solving the problem would be installing numerous reactive power compensation plants in the expanding electricity networks and building HVDC transmission lines from the generation centers to the load centers.

However, expanding the network quickly enough to meet rising demand and renewable penetration is not feasible due to the high investment required and lengthy planning consent processes.

The other option would be to use conventional load flow controllers. So far, this has only been possible to a limited extent. Traditional load flow controllers can divide the transmission power between several lines reducing the need for current-related redispatch, but they are comparatively slow, and their ability to handle additional tasks such as harmonics for the AC network is limited.

In power grids, phase shift transformers (PST) provide active power flow control. By enforcing or blocking loads, they improve the stability and flexibility of grids and help grid operators get the most out of existing hardware.

For decades, series compensation (SC) technology has improved grid stability and contributed to the optimal utilization of transmission lines. TSOs around the world have already benefited from solutions that were tailored to their specific requirements.

The main benefits of series compensation are the reduction of line voltage drops, limitation of load-dependent drops, and a reduction of the transmission angle. However, they have limited dynamic capabilities; large quantities are required to work effectively, and again they cannot provide reactive power compensation.

Siemens Energy’s UPFC PLUS solution is based on the Modular Multilevel Converter (MMC) architecture that is already proven in the company’s SVC PLUS and HVDC PLUS technology. This UPFC is used to control and influence the transmitted electrical power in individual lines in national and meshed power grids.

The system is designed for the high-voltage three-phase interconnections, such as the 380 kV and 220 kV voltage levels typical in Europe. It uses control power electronics like the technology used in HVDC, but in the case of UPFC, they are not used directly for power transmission, but for influencing and modulating the transmitted alternating current.

With a response time of 30ms, UPFC PLUS works significantly faster than a phase shifter, enabling appropriately rapid intervention in critical situations.

Unlike a phase shifter, it can not only control the load flow but also offers the possibility of dynamic reactive power compensation and voltage control and can even dampen disturbances such as oscillations and harmonics.

About the author: German Kuhn is FACTS Product Lifecycle Manager at Siemens Energy.

Fuelling nuclear innovation in the UK