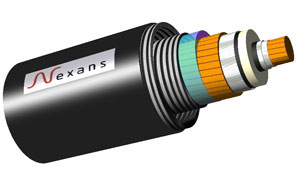 Nexans (Euronext:à‚ NEX) has been awarded a subsea cable contract in excess of $160m by Scottish Hydro Electric (SHE) Transmission.

According to an emailed statement, the subsea cables will be installed in deep waters to create a vital new high voltage power link for Scotland.

The subsea power link will form part of an upgrade in the electricity transmission network between the Kintyre peninsula and mainland coast in Southwest Scotland.

The upgrade, which is part of SHE Transmission’s wider plans to invest up to $8bn in its electricity network between 2013 and 2021, will release up to 150 MW of additional grid capacity for renewable projects signalling a significant boost for the Kintyre economy.

Nexans will create a twin subsea cable link, rated at 230 kV and 240 MVA, from a new substation on the peninsula to the mainland coast. The project includes the supply and installation of two 41 km 3-core submarine cables together with six 5 km single core underground cables for the land element. A fibre optic cable for control of the cable link will be integrated within the subsea cables and supplied separately for the land cables.

Due to the route, the installation of the subsea cables in water depths of over 100 metres is one of the key elements of the project. The installation will be carried out by Nexans’ own cable ship, the C/S Nexans Skagerrak and the cable will be protected on the seabed by burial using the specialised Capjet system as well as rock dumping.