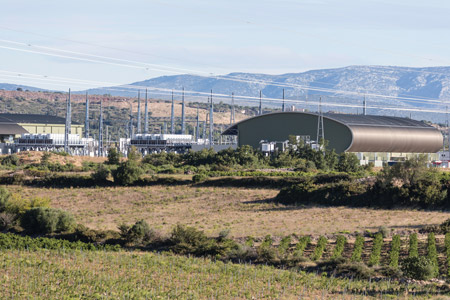 A new high voltage direct current link between France and Spain promises to advance Europe’s energy goals for 2020 and beyond. Tildy Bayar visited the project and spoke with representatives of the companies from three nations working together on it

In a significant step on the road to a common European energy market, a high voltage direct current (HVDC) transmission line has been built in the mountainous Basque region between Santa Llogaia (near Figueres) in Spain and Baixas (near Perpignan) in France, a distance of 65 km. The project is currently in the commissioning stage and will begin commercial operation this summer. When operational, it will double the energy exchange capacity between the two countries and contribute significantly to national and European energy goals for 2020 and beyond.

This the first transmission project to be built between France and Spain in 30 years, and the fifth power link between the countries. It is supported by the EU to the tune of €700 million ($756 million), of which €225 million came in the form of a European Commission grant and €350 million as a loan from the European Investment Bank. The link is classified as a European Priority Project for its potential to improve supply security and resource diversification as well as pave the way for power market integration in southwestern Europe. It will make each country’s unique strengths (renewables in Spain, nuclear power in France) available to the other, with a special focus on the role of Spain’s 30 GW of renewable power in meeting Europe’s climate targets.

In practical terms, a pan-European energy market will rely not only on stable national grids and security of supply. Cross-border connections will also be crucial to ensuring that demand peaks in individual member states can be addressed more quickly. Several such systems are already in place, such as the BritNed connection between the UK and the Netherlands and the EstLink2 system linking Estonia and Finland.

According to Siemens, which built matching converter stations on the French and Spanish sides for utilities RTÉ and Red Eléctrica, the new HVDC system can transmit a rated power of 2 GW in both directions – currently the world’s most powerful HVDC transmission system based on voltage sourced converters, the firm says. Siemens’ pilot system for HVDC transmission of this type was the Trans Bay cable in San Francisco, California at 400 MW/200 kV.

Developer INterconexión ELéctrica FranciaEspaña (INELFE) and Siemens claim that the project represents a number of world firsts, including a record distance for an underground power line and a record DC power transmission capacity with voltage sourced converter technology. And, in another first, it features the first underground tunnel (8 km, running below the Pyrenees mountains) built exclusively to house a power line.

The project involved collaboration with a number of major European partners. French construction firm Eiffage and Madrid-based infrastructure company Dragados built the tunnel; the cables were provided by cable manufacturer Prysmian; and SAG and Spain’s Ferrovial handled the trenches and directional drilling. Siemens worked with two parallel project development teams on the French and Spanish sides.

When asked about the biggest challenge involved in organizing such a large undertaking, project manager Volker Lehmann offered an unexpected answer. The biggest challenge, he said, was “language and cross-border cooperation” between the French and Spanish teams and Siemens’ German team, with business conducted in English and all documentation needing to be translated into two languages. In addition, because of the size of the project, he said that many details had to be newly engineered and designed due to a lack of previous models.

And, of course, additional challenges arose during the work, with Lehmann citing an instance where a butterfly habitat was discovered at the entrance to the underground tunnel and needed to be carefully moved before work could proceed.

Public acceptance of the project was an issue from the first proposal in 2003, according to INELFE, and caused significant delays throughout the process. Yves Decoeur, an engineer with RTÉ , INELFE general manager and leader of the French project team, referred to “a hard [public] debate” in France in 2003, and “many discussions” thereafter. In fact, opposition was so strong on both sides of the border that in 2007, after appeals to Brussels by the French and Spanish governments, former Italian prime minister and European Commissioner Mario Monti was appointed as the project’s European Coordinator in order to address the bottleneck. It was decided that the line would run underground, after which the French public protest was “much quieter”, said Decoeur. But, he added, there were still “other problems and questions” throughout the project’s construction, which did not begin until 2011.

Lluis Pinós Jorba, an industrial engineer with Red Eléctrica and the Spanish team lead, said public acceptance issues in Spain had initially been “more or less the same” as in France. “The solution is very, very complicated and it was difficult to develop the project,” he said – but once it became clear that the lines would run underground, “we didn’t have problems”. However, he added that “before Monti, reception was impossible”.

To address the environmental concerns raised by such an extensive project, an Environmental Monitoring Programme was set up in Spain, while in France a counterpart committee oversees the project’s impact on both the landscape and wildlife.

Although the underground technology eased public fears, it was around 10 times more costly than an AC solution using an overhead line, according to Pinós. “The [HVDC] converter stations are very expensive,” he said. “For a DC line, [the converter station] is half of the €350 million [the amount of the EIB loan]”. However, he added that the price of the converter station was lower than it would have been for a project involving a shorter cable.

Decoeur said there are many changes in the direction of power flow between France and Spain on any given day, depending on the differing consumption peaks in each country. While power consumption tends to peak around 1 pm and 7 pm in France, in Spain it is around noon and 9 pm. He said there were between seven and eight direction changes on one recent day. In order to meet this fluctuating demand, the ability to quickly reverse the power flow was needed. According to Siemens, with the HVDC system flow reversal is possible in a record 150 milliseconds.

The HVDC transmission system consists of a converter station where the AC voltage from a conventional power grid is converted into DC voltage; a power transmission cable running underground; and another converter station at the other end which converts the DC voltage back to AC. According to Lehmann, the French and Spanish converter stations are identical except in one aspect: the design of the converter hall. The Spanish converter hall at Santa Llogaia is a standard design, while the French equivalent at Baixas was specially designed to blend into the landscape and is barely visible from the surrounding area.

The interconnection is based on what Siemens has called HVDC Plus, which includes its voltage sourced converters (VSCs) in a modular, multilevel configuration. The VSCs are self-commutating, which means they are not driven by mains voltage as in traditional grid-commutated technology, but use the DC voltage itself. Siemens says this offers very fast control and protective intervention capability, which boosts the transmission system’s stability and reduces the number of grid faults. It also offers independent control of active and reactive power, supply of passive networks, system recovery and – importantly – black start capability, since the system is able to provide constant voltage and frequency like a generator. In addition, it means the converter stations can be smaller – as Lehmann noted, “with classic HVDC you need the same area just for the harmonic filters as the entire plant here. This is very compact”.

For this project, the capacity of the voltage sourced converter technology was increased to 1 GW.

Inside the converter stations

On a tour, the Santa Llogaia station seems deserted, with only an occasional worker glimpsed. This is because, according to Lehmann, it was planned as an unmanned station, with only a guard on duty; its functions will be controlled by a central operator in Madrid, and most of the commissioning tests are being carried out remotely by a load dispatcher at that location. Although metal theft at unmanned power stations has been an issue in Spain, Lehmann said as much of the copper cable used in the station as possible has been buried underground, and under concrete tiles, to deter break-ins.

The station features seven single-phase transformers, with three needed for each link and one spare on “nearly hot standby” according to Lehmann. Transporting the transformers to the site, he added, was challenging and constituted “a project within the project”.

Standing outside the converter hall on a windy day, another challenge became apparent. Due to the high winds in this mountainous region, said Lehmann, “sometimes you could not even walk outside at all” and construction work was frequently halted for safety reasons.

Inside the converter hall, power modules are connected in series and stacked in what the crew calls “six-packs”, or towers with four levels housing six modules each. These connect to six busbar branches which exit through the wall and connect to the AC and DC yard outside. The power modules consist of two integrated circuits (Insulated Gate Bipolar Transistors, or IGBTs) which switch on and off in microseconds to charge a capacitor. According to Lehmann, the setup is unique in that no harmonic filters are needed, further reducing the cost. The technology was developed in collaboration with workers at the university in Munich, he said.

Everyone who enters the converter hall must wear protective plastic shoe coverings as, according to Lehmann, the interior of the large building “would take a couple of months to clean – so we won’t”, but dust must be kept out. He explained that the hall has been designed to be as airtight as possible, with vents at the doors that push the cooled inside air out on opening rather than letting in a blast of warm, unfiltered air.

According to Tim Dawidowsky, CEO of Siemens’ transmission solutions business, there will be a high portion of DC power in a potential European ‘supergrid’. In addition, significant European cross-national transmission projects are expected, including links between Belgium and the UK, Norway and Germany, Germany and Belgium, Germany and Denmark, and the first north-south corridor in Germany, known as UltraNet (although according to some grid-watchers this will probably largely use existing overhead lines).

Indeed, the global market for power transmission solutions is growing rapidly and the HVDC market is predicted to almost double over the next five years from the current €2.5 billion, while the number of HVDC systems installed worldwide is expected to grow by 250 GW by 2020. In Europe, HVDC technology is expected to play a key role in the transition to a low-carbon energy mix.

Against this booming backdrop, according to Dawidowsky, Siemens “expects some major awards in the next months”.