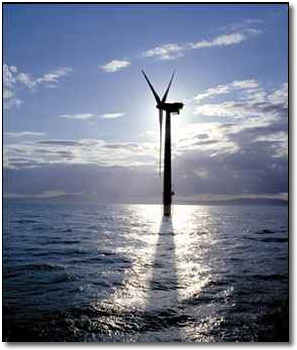 Mainstream Energy’s 448 MW Neart na Gaoithe wind farm is to feature a streamlined transmission system and a Boom Lock installation device as the company aims to produce the world’s cheapest electricity from an offshore wind farm.

In order to achieve its low costs the project will go without traditional large heavy offshore substation platforms and instead use two wind turbine foundations to support the transmission module. The Siemens-developed system is expected to reduce substation capital spending costs by 30 per cent as it would require less material and no specialist vessels will be needed for installation.

A Boom Lock system allows for installation of turbines on the windiest of days. The device, developed by High Wind, is mounted on an offshore crane for greater control, and can work in winds of up to 15 metres per second. This means more time out at sea, and less time with vessels sat in the harbour while projects costs tick upwards.

Mainstream secured a contract in the UK government’s first Contract for Difference auction earlier this year, which pays developers a guaranteed rate for the clean power they generate.

The Neart na Goithe, which translates as ‘Strength of the wind’ project off the east coast of Scotland has a 15 year contract from the government to deliver power at £114.39, which is 18.3 per cent cheaper than the previous administrative strike price of £140/MW.

“Logically, wind farms are being built in areas where there is a lot of wind. That’s why it makes sense to use the right tools to maximise on the workability during periods of strong winds and, at the same time, maintain the highest level of safety,” Bart De Poorter, general manager of GeoSea said in a statement.