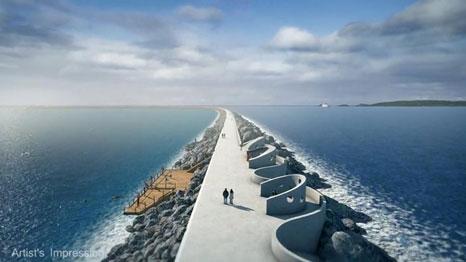 One of Britain’s largest insurers has announced its intention to invest over £1bn ($1.6bn) in the construction of a tidal lagoon power plant in Swansea Bay, Wales.

Prudential Plc (PRU), the largest UK insurer by market value, believes that the 320 MW plant could generate as much as 8 per cent of the country’s electricity.

Prudential expects to invest as much as £600m in the project with other investors to generate the remaining capital.

Tidal lagoons are areas of water separated from the rest of the sea. In a tidal-power plant, water is trapped and released from the lagoon through turbines, considered to be less damaging to the environment than tidal barrages.

Construction of the project should begin next year and it’s expected to start working in 2018, when it will produce more than 495 gigawatt-hours of electricity annually for 120 years. Good Energy Group Plc, a British renewable-power supplier, in May invested 500,000 pounds in Tidal Lagoon.