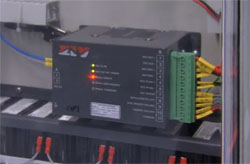 The company will also supply around 20,000 three-phase meters, and is now participating in a tender for data concentrator units.

CG Automation has benefited from Spain’s regulatory framework, which mandates that 70 per cent of all utilities’ analog meters must be replaced by 2016 and 100 per cent by 2018. The nation is predicted to continue its market dominance in 2014, while large-scale deployments of smart meters in the UK, Germany and France are expected to give the market a boost by late 2015. By 2020, Europe’s installation base for smart meters is projected to rise sharply, reaching 180 million, while the Asian market is also expected to gain significant traction.

CG, a subsidiary of Indian business conglomerate the Avantha Group, acquired smart meter maker ZIV in 2012. Its 4CTT meter was the first model to be certified by trade body the PRIME alliance, in 2013.

CG CEO and managing director Laurent Demortier said, “This win is very significant; we sincerely thank GNF. We are proud to be the main PRIME meter provider. In the coming years, legislative and regulatory incentives will be the key to promote smart grid investments. CG will benefit from the smart grid market driving forces and foresees a very promising growing opportunity.”à‚