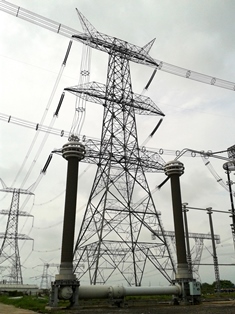 ABB has installed in India what it claims is the highest alternating current voltage breaker in the world.

The Swiss company says that once operational, the 1200 kV ultra-high voltage switchgear will have a switching capacity of 10,400 MW, “a switch capable of turning ‘on’ or ‘off’ the electricity generated by 10 large power plants or the combined average annual electrical load of Switzerland and Denmark, within milliseconds”.

The circuit breaker has been installed at a 1200 kV national test station built by Power Grid Corporation of India Limited (PGCIL), India’s central transmission utility, at Bina in the central state of Madhya Pradesh.

Alongside the circuit breaker, the hybrid switchgear solution comprises a gas-insulated disconnector, current transformers and monitoring and diagnostic equipment.

Bernhard Jucker, head of ABB’s power products division, said: “ABB has a long track record in India and we are pleased to continue to support the country in the development of an efficient and reliable power grid. Ultra high-voltage technologies are especially suitable for large countries such as India where power often has to be transmitted over large distances from generation to load centers in the most efficient way.”

R N Nayak, chairman of PGCIL, said that the installation of the switchgear “takes us a step further in the development of our ultra-high voltage transmission network”.