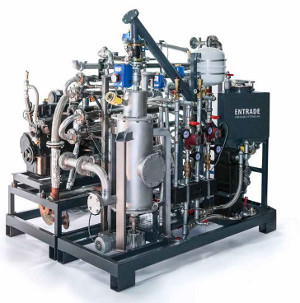 Scottish renewable technology firm VG Energy has purchased an E3 mobile micro-biomass power plant from Germany’s Entrade for use in powering its operations.

The purchase represents Entrade’s second sale to the UK market, although it says it is currently ramping up its manufacturing in response to “significant demand” in the country.

The dimensions of the 22 kWe/55 kWth E3 unit are 1.86 metres x 1.56 metres x 2 metres. The company says it is designed to operate 24/7 for 30 years with less than half an hour of weekly maintenance. It is containerized for ease of transport and modular, allowing customers to combine units into a larger plant.

Entrade’s CFO, James Kong, said: “Internationally, we have identified growth market potential of over €9bn ($10bn) for Entrade’s E3 and larger biomass power plants, and we have a growing number of projects in the pipeline.

“Entrade’s greatest challenge in the short term will be scaling our manufacturing capabilities and supporting staff to stay ahead of demand,” he added. “In the UK alone, Entrade has identified an immediate à‚£800m ($1.2bn) market, for which it plans to create as many as 120 jobs. Within the UK, the appetite for biomass is particularly powerful in Scotland, where nearly 50 per cent of electricity generated comes from renewables.”

The firm says it will seek à‚£10m in equity capital to scale its manufacturing capabilities to meet rising demand ahead of an initial public offering in New York by late 2015.