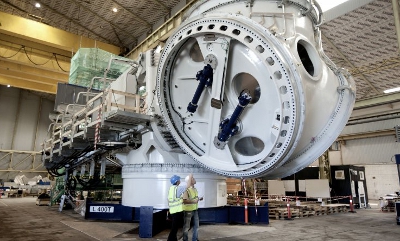 Vestas has announced that the group’s first V164 8 MW offshore wind turbine, reputedly the world’s most powerful, is now operational.

The wind power turbine sweeps an area equivalent to three football fields and spokeseperson Michael Zarin told AFP that he expected the scale of the development would allow customers to reduce energy costs.

“You can have fewer turbines to have the same amount of electricity. … You can save a lot of the expense on things like the foundations, the cabling or the substation,” he said.

The turbine, which will be the flagship product for a joint venture between Vestas and Mitsubishi Heavy Industries, has the capacity to produce electricity for 7,500 European households.

It’s been installed on land at the Danish National Test Centre for Large Wind Turbines in Oesterild in north western Denmark.

Vestas said serial production could begin in 2015 if there is enough demand.