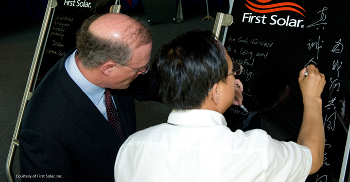 Plans for the world’s largest solar photovoltaic project in China have been cancelled.

The 2 GW Ordos project, planned for construction near Ordos City, Inner Mongolia by the Chinese government and US-based solar developer First Solar, has been taken off the table after over four years of negotiation failed to produce agreement on a price for its power, which would have been sold to China’s grid.

A spokesman for First Solar said the cancellation was “due to the market environment”.

China and First Solar signed a memorandum of understanding (pictured) in 2009, which included the potential for First Solar to open a manufacturing plant in Inner Mongolia. At the time, construction on the 30-MW first phase of the project was expected to begin in early 2010, with phases two (100 MW) and three (870 MW) planned for 2014, and phase four (1 GW) for 2019.

The project was planned as part of an 11.95 GW New Energy Industry Demonstration Zone in Ordos City, which would include solar, wind, hydro and biomass power sources.