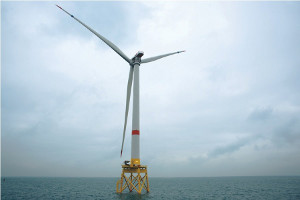 Alstom has installed its mammoth Haliade 150-6 MW offshore wind turbine at the Belwind site off the Belgian coast.

The turbine is the largest installed in sea waters. It has a rotor diameter of 150 metres and blade lengths of 73.5 metres. It will yield 15 per cent more power than existing offshore wind turbines, or enough to supply around 5000 households, Alstom claims.

Alstom has signed a contract to supply 240 Haliade turbines for three offshore wind farms owned by a consortium led by EDF. Alstom has confirmed that it will set up four French manufacturing facilities for nacelles, generators, blades and towers. The first stone of the nacelle factory was laid in early 2013.

In early May Alstom also announced that it is part of a team that has received a $47m grant from the US Department of Energy (DOE) for phase two of the Virginia Offshore Wind Technology Advancement Project (VOWTAP) led by Dominion Virginia Power. Alstom’s contribution to the project includes the completion of front end engineering design, installation and testing of two Haliade 150-6MW turbines approximately 24 miles off the Virginia coast.