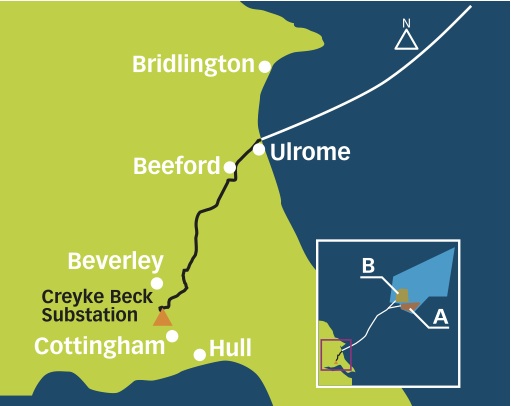 Composed of two adjacent wind farms, Dogger Bank Creyke Beck is also the UK’s furthest from shore. The proposed site, Creyke Beck A and B, is 81 miles offshore. When completed, the site will cover a maximum area of 430 square miles (1114 km2). It is the first proposed project for the Dogger Bank offshore development zone, which covers 3343 square miles (8660 km2). à‚

The 2.4 GW project is expected to supply around 2.5 per cent of the UK’s electricity, or enough for 1.8 million households. It should reduce the nation’s carbon emissions by almost four million tonnes per year, trade body RenewableUK said.

The giant wind farm will now enter a pre-construction phase, before the final investment decision is made. According to developer Forewind, a consortium made up of RWE, SSE, Statkraft and Statoil, construction is scheduled to begin in 2017 and finish in 2022. The first power from the wind farm is expected in 2018.

Davey commented: “Making the most of Britain’s homegrown energy is creating jobs and businesses in the UK, getting the best deal for consumers and reducing our reliance on foreign imports. Wind power is vital to this plan.”

Nick Medic, RenewableUK’s Director of Offshore Renewables, said the project “will surely be considered as one of the most significant infrastructure projects ever undertaken by the wind industry.

“Dogger Bank demonstrates the sheer potential of offshore technology to turn our vast ocean and wind resources into green energy,” he continued. “It is a project that pushes the offshore engineering envelope ” demonstrating how far this technology has evolved.”