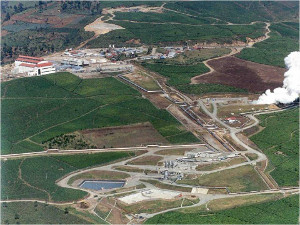 When completed, the plant in North Sumatra province will be the world’s largest, easily topping a list that includes Mexico‘s Cerro Prieto I and II at 220 MW each, the Philippines’ 233 MW Malitbog and Indonesia’s own 227 MW Wayang Windu geothermal station. à‚

“The Sarulla groundbreaking will be very soon,” minister Chairul Tanjung was quoted as saying. According to Tanjung the project has reached financial close.

Begun in 1990, the $1.6bn project has been delayed since 1997, with difficulties in financing cited as the reason. Now the government says Sarulla phase one is planned to begin operation in 2016, phase two in 2017 and phase three in 2018.à‚

Sponsors are the Itochu Corporation with a 25 per cent share, Kyushu Electric Power Company with 25 per cent, PT Medco Power Indonesia à‚ with 37.5 per cent and Ormat International with 12.5 per cent.

Indonesia aims to get 12 per cent of its power from its estimated 29 GW of geothermal potential by 2025. à‚