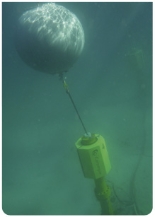 The world’s first grid-connected wave power station has been activated in Australia.

Australian company Carnegie Wave Energy wants to accelerate the development of the sector and have developed a project which transfers wave energy straight into the electrical grid.

“This is the first array of wave power generators to be connected to an electricity grid in Australia and worldwide,” said Ivor Frischknecht, CEO of the Australian Renewable Energy Agency, in a statement. The Agency has provided $13 million of the $32 million project.

“During the testing phase, the first 240kW peak capacity CETO 5 wave unit operated successfully for more than 2,000 hours. The innovative CETO technology moves with the waves to drive tethered seabed pumps and operates under water, providing protection from storms and corrosion.”

As the wave crash into the buoys and transfer their energy, pressurized seawater is pushed through a pipeline beneath the ocean floor to an onshore hydroelectric power station. Here, the high-pressure water drives a turbine and generates electricity. The zero-emission energy will generate energy for a hydroelectric plant and a desalination plant, thus helping generate more energy and fresh water.

The company is already considering scaling things up. Carnegie chief executive Michael Ottaviano told The West Australian the project could pave the way for much bigger versions capable of powering entire towns.

“The challenge from here on is really about scale and cost,” he said. ”We need to make the technology bigger, we need to make our projects bigger because that’s what allows you to get your costs down. Our wave resources in Western Australia are the best in the world, and theoretically, the resources that hit our coastline everyday could power the state 10 times over,” Ottaviano told ABC News.