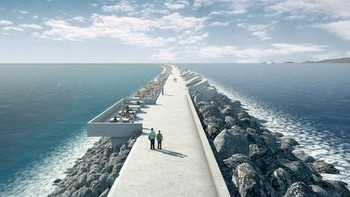 Plans are in the works for the world’s first tidal lagoon power project, to be built in the UK.

The project, which is planned to include four lagoons in Wales and two in England, could eventually generate 8 per cent of the UK’s electricity according to estimates. à‚

A planning application has been filed for a first 320 MW, à‚£1bn ($1.5bn) scheme in Swansea, Wales (pictured, artist’s rendition). The proposed project has garnered enthusiasm from energy secretary Ed Davey, who said he is “very excited by the prospect of tidal power”. à‚

The Swansea project is predicted to generate 14 hours of power per day and to supply around 155,000 households for the installation’s expected lifetime of 120 years. Developer Tidal Lagoon Power is aiming for grid connection in 2018.

The firm is currently negotiating its power price with the government, and has reportedly filed a request for à‚£168/MWh for the Swansea lagoon and à‚£90-à‚£95/MWh for a second lagoon in Cardiff, Wales, which it says would be more efficient, as would subsequent projects.

Mark Shorrock, Tidal Lagoon Power’s CEO, told the BBC News service: “We have a wonderful opportunity to create energy from the dance between the moon and the earth. It is admittedly rather expensive to begin with but as time goes on and the capital costs are paid off it becomes incredibly cheap.”

“I can’t make a decision on this yet because discussions are ongoing,” said Davey, adding: “We have got some of the biggest tidal ranges in the world and it would be really useful if we could harness some of that clean energy.”

Andritz Hydro and GE have been named as the preferred joint bidders for supply of sixteen bidirectional tidal turbines (pictured, below graphic) for the Swansea project. Tidal Lagoon Power said the majority of the turbines and all generators are to be manufactured in the UK and assembled at a new Welsh facility. à‚