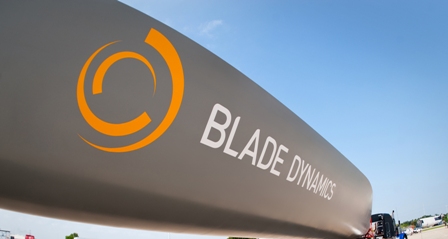 A UK firm is building what it believes will be longest ever wind turbine blades.

In a £15.5m ($24.8m) project, Blade Dynamics – which is based in the Isle of Wight off the south coast of England – will construct blades of between 80 to 100 metres in length, incorporating carbon fibre rather than conventional fibre glass. Blades currently deployed offshore are between 60 to 75 metres in length.

The blades are expected to be put into production by late 2014, with structural trials to be carried out at a UK test facility.

Blade Dynamics claim the blades will weigh up to 40 per cent less than their conventional glass-fibre counterparts, which would enable significant weight and cost savings throughout the rest of the turbine system.

The blades are expected to be utilised on the next generation of large offshore wind turbines currently under development with a capacity of 8 to10 MW.

The project is being backed by the UK’s Energy Technologies Institute, which will become an equity investor in the blade developer, helping it with technology development and allowing the company to grow its workforce by up to a third in the short to medium term.

Blade Dynamics’ senior technical manager David Cripps said: “We have worked hard on the design of this blade technology for a number of years now. Financial backing from the ETI for this project allows deployment on ultra-large turbines far sooner than would otherwise have been possible and as a result of this project we will be hiring new engineers and technologists to make this possible.”

He added that longer, low weight blades were “a key part of the solution to making the generation of electricity through offshore wind both more reliable and more economical”.

The ETI’s offshore wind project manager Paul Trinick said: “Offshore wind has the potential to be a much larger contributor to the UK energy system if today’s costs can be significantly reduced. Investing in this project to develop larger, more efficient blades is a key step for the whole industry in paving the way for more efficient turbines, which will in turn help bring the costs of generating electricity down.