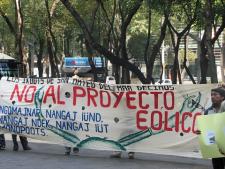 A 396 MW wind power project under development by Mareña Renovables in the Mexican state of Oaxaca could be at risk due to protests by the Huave indigenous community.

According to the Infrastructure Trust Macquarie Mexico (FIMM), one of the entities taking part in the project, protesters have blocked access to the plant’s works, putting the project’s continuation at risk.

In January Matt DaPrato, a Latin America analyst with IHS Emerging Energy Research, was quoted as saying that it was “increasingly likely it will not go forward”. Initially scheduled for commissioning in 2012, the project’s deadlines have been repeatedly pushed back due to the protests.

Mareña Renovables belongs to a consortium of investors which has already invested about $10m in the project.