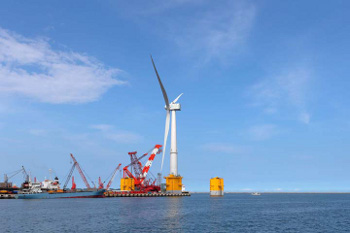 The world’s largest floating wind turbine was installed this week off the Japanese coast.

The 7 MW turbine (pictured) was secured to the seabed with four 20-tonne anchors, about 23 km off Fukushima.

Engineers working on the project told the press that the installation had suffered multiple delays due to typhoons, but that once standing, the turbine will be capable of resisting extreme weather conditions ” such as waves up to 20 metres ” as its anchor chains are slack and allow it to move without damage.

The turbine was assembled in June on a three-column semi-submersed platform in Onahama port. It now joins a 2 MW floating turbine already in the water, installed in 2013 under the rubric of the Fukushima floating offshore wind farm demonstration project (Fukushima FORWARD), which is funded by Japan’s Ministry of Economy, Trade and Industry.

The Fukushima FORWARD project aims to eventually install three floating turbines and a floating 66 kV substation, for a total capacity of 16 MW. The consortium of firms involved in the project includes Mitsubishi Heavy Industries, Marubeni, Hitachi, the University of Tokyo and civil engineering firm Shimizu Corporation.