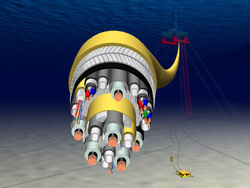 Persistent power cuts in the northwest of France has prompted EDF (Euronext: EDF) to discuss a subsea cable link to connect to the south coast of wind power-plenty Ireland.

The 600-kilometre cable would have a capacity of around 700 megawatts (MW), the equivalent of 450,000 households in consumption and early estimations are for the link to be in place by 2025, according to the French power grid, RTE.
RTE, owned by EDF, and its Irish counterpart EirGrid have undertaken preliminary studies in the last few months and will start seabed analysis later this year under a new agreement signed between the two power infrastructure operators.

“The benefits of the France-Ireland connection will be better supply security, downward pressure on electricity prices from increased competition and potential exports of renewable energy,” EirGrid president Finatan Slye said in the statement.

Ireland, which is expected to produce more wind power than it needs, leaving room for exports, is already linked to Britain via two power cables, with the second link completed last year.