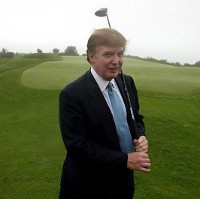 US property tycoon, Donald Trump, has lost a legal action against a major experimental wind farm, which he had contended devalued his new golf course in Aberdeenshire, Scotland.

The billionaire property developer had also alleged that Alex Salmond, Scotland‘s first minister, had secretly interfered in the decision to approve the 11-turbine European offshore wind deployment centre site (EOWDC) in Aberdeen Bay ” a claim rejected on Tuesday by a Scottish civil court judge, Lord Doherty.
Trump alleged there had been clear and illegal bias by the Scottish government ” and that his rights under the European convention of human rights had been breached.

In a ruling with far wider significance for the future of Scottish wind power, the judge also disputed a previous court ruling that no wind farm could be approved until or unless it has an electricity generation licence.

Planning approval for one of Europe’s largest onshore wind farms, the huge 103-turbine Viking scheme on Shetland, was suspended in October after a judge, Lady Clark, ruled that it should not have been granted without an electricity generation licence.

Mr Trump later said of the Court of Session ruling: “We will appeal this decision.”

A follow up statement from the Trump organisation also added, “Despite today’s decision, the EOWDC proposal has numerous economic and legal obstacles that will ultimately prevent its construction.”

A Scottish government spokesperson said: “Scottish ministers are pleased that the court has found in their favour. This project will give the industry the ability to test and demonstrate new technologies to accelerate its growth.”