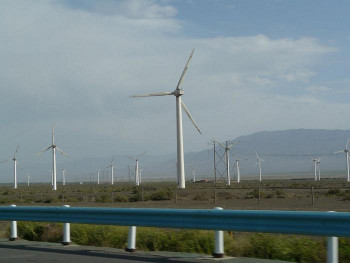 China’s Xinjiang Uyghur autonomous region in the northwest of the country is set to implement a novel heating solution for the coming winter, according to reports in the Chinese press.

The regional development and reform commission reportedly said this weekend that two areas of the region will use wind energy to power heating networks.

The commission said Xinjiang’s wind power generation rose around 20 per cent in the first half of 2015 over the same period in the previous year, but nearly 30 per cent of this additional power went unused.

In order to avoid further waste, the excess wind power will be used to heat buildings in the regional capital city of Ürümqi.

In addition, two ultra-high voltage transmission lines linking Xinjiang with eastern China and Sichuan province are under construction in order to distribute the wind power.

Xinjiang boasts the world’s eighth-largest wind farm, the 500 MW Dabancheng facility, and more is on the way. Chinese developer Titan Wind Energy (Suzhou) Co Ltd announced in July that it plans to invest $351m in 300 MW of wind power capacity in Xinjiang.