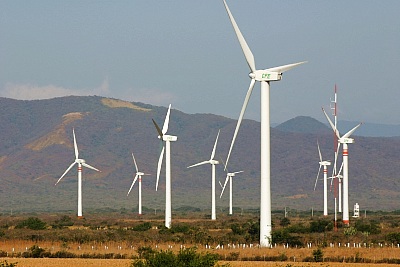 Mexico’s bet on renewable energy has been expanding for the last decade. Renewable power sources received a direct investment of $11bn within the 2003-2013 period, according to a report by BN Americas, and energy sectors such as wind power have been driven by this investment. Financing came mainly from Spain, Germany and the US.

Approximately 15 per cent of Mexico’s power production comes from renewable facilities, and this figure is expected to increase by 35 per cent by 2024. At least half of that percentage will come from wind sources, which will fulfil the OECD countries’ standards. By 2022, wind facilities could have an overall installed capacity of 15,000 MW in Mexico.

The 2015-2018 period will be key to achieving the goals set by the federal government. An article in Mexican newspaper El Economista said that, within those years, about $14bn will be invested in wind farms – triple the sum invested between 2009 and 2014.

Figures from the Mexican Wind Energy Association (AMDEE) claim that, in late 2014, the nation’s overall installed capacity from wind facilities reached 2551 MW. At the present moment there are 31 operational wind farms in the country, and this capacity is expected to increase to 9500 MW by 2018.

AMDEE chairman José Adrián Escofet Cedeño said the coming wind projects will be mainly financed by commercial and development banking, which will lend 80 per cent of the total cost.

The state-owned Federal Electricity Commission (CFE), which is in charge of regulating Mexico’s energy market, is to develop eight wind farms with a total capacity of 2300 MW. Among these new power stations will be Central Eólica Sureste Fase II, located in the state of Oaxaca, well-known for its large wind potential. This wind farm will have an installed capacity of 102 MW.

Spanish companies such as Acciona, Iberdrola and Gamesa will play a key role in the growth of Mexico’s wind power sector. Acciona’s general manager for Mexico, Miguel Ángel Alonso Rubio, has announced that the company plans to add 1000 MW thanks to four new projects. Gamesa aims to add 500 MW, while Iberdrola is to invest about $5bn before 2020, although the exact capacity it plans to install is unknown. Iberdrola will also soon open a 65 MW wind farm in Puebla.

Mexican wind energy is now needed more than ever, not only for the importance of producing electricity through non-polluting devices, but also because of the high cost of conventional power production. Most fossil fuel-fired power stations work through oil combustion, but despite Mexico’s huge oil deposits, these resources are difficult to extract. According to Revista Eólica y del Vehículo Eléctrico magazine, state-owned Petróleos Mexicanos (Pemex) lacks the technology and resources needed to exploit deep-water oilfields, making support for renewable energy projects even more important.

Oaxaca is one place with better conditions for wind power production. State governor Gabino Cué Monteagudo told NSS Oaxaca that the region is at the top of the world scale for wind energy generation potential. There are currently 21 wind facilities in the state, contributing 90 per cent of Mexico’s overall wind generation. There are also two new projects underway.

The numbers speak for themselves. Wind energy production in the Isthmus of Tehuantepec –were Oaxaca is located- grew from 1.5 MW in 1994 to over 1,250 MW in 2012. The region’s potential is expected to reach 10,000 MW. Among the new projects there is 50-MW Ingenio wind farm.

The federal government is convinced that Mexico’s economic growth will be possible if the energy sector is updated. Renewable sources are the future and among them wind energy is the best positioned.