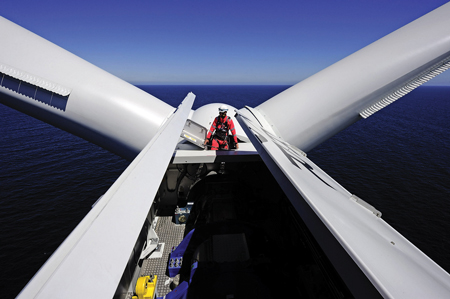 Dong Energy is to create a wind farm repair hub at Grimsby in eastern England.

200 long term jobs will be created with the Danish firm’s move, which they say would be up and running from March 2018, initially serving three east coast windfarms, Westermost Rough, Race Bank and Hornsea Project One.

The new facility at Grimsby’s Royal Dock will include a marine and helicopter centre capable for around-the-clock service to offshore farms. It will be served by two new hi-tech ships which can carry a 60-strong maintenance crew and remain at sea for long periods.

Brent Cheshire, Dong’s UK chairman, told the Guardian the investment, worth about £10m, was a vote of confidence in the UK industry and would change how windfarms were maintained.

“This new operational hub in Grimsby will be a game-changing industry first, raising the bar for the way we serve offshore wind farms. It will generate direct and indirect job opportunities in the Humber region, as well as opportunities for the local supply chain,” Dong said.

“It represents a massive vote of confidence to the UK offshore wind industry and confirms our commitment to the Humber region where by 2019 we expect to have invested around £6bn.”