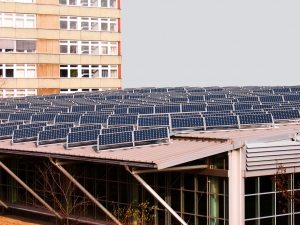 A web-based tool that will estimate the potential for rooftop solar power in India‘s cities is to be launched in Chandigarh. à‚

The Energy and Resources Institute (TERI) unveiled its new cloud-based, open-source tool last week. It is based on Geogra

phic Information System (GIS) technology, using data visualisation to produce a map of a given city showing buildings with the potential for solar photovoltaic installations.