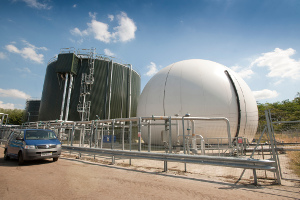 New research by Scottish Renewables reveals that the anaerobic digestion (AD) industry looks set to more than double in size in the next two years.

Sixteen plants already operate in Scotland, and a further 24 have planning approval, fuelled by the rise in local authority food waste collections and the mandatory separation of food waste for businesses, which came into effect on 1 January, 2014.

Participating Scottish local authorities currently pick up 8000 tonnes of household food waste every year. That figure could rise to 72,000 tonnes if all 32 councils roll out weekly food waste collection schemes.

Stephanie Clark, Policy Manager at Scottish Renewables, said: ‘Food waste is a source of fuel for anaerobic digesters, and we expect that an increase in the amount of food waste collected by local authorities will now lead to a significant increase in the number of AD plants in Scotland.’

The report cites the example of Scottish Water’s AD facility in Cumbernauld, Lanarkshire, with the company’s Finance Director, Alan Scott, explaining how the Deerdykes facility (pictured) can generate up to 8,000 MWh a year and is presently the largest single contributor to Scottish Water’s energy self-generation, at around 32%. The company set up its own food waste collection service to fuel the project.

‘As a significant user of electricity Scottish Water is working to reduce energy consumption as well as to increase the amount of energy that we generate ourselves. This can help us keep costs low for the benefit of our customers,’ said Scott.