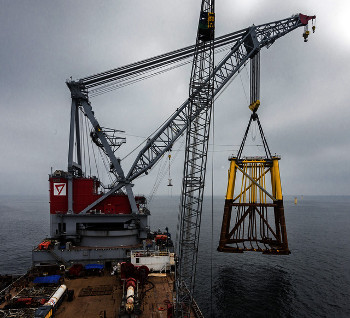 This will be the two firms’ second joint offshore wind project after Dan Tysk (pictured), 70 km off the island of Sylt in the North Sea, which is scheduled to come online in 2015.

The new Sandbank project, to be built 110 km from shore, will include 72 4-MW wind turbines from Siemens, for a total capacity of 288 MW. It is expected to generate 1.4 TWh per year, or enough power to supply around 400,000 households. Construction is scheduled to begin in 2015.

Vattenfall holds a 51 per cent share in the project and says it will invest around SEK5.6bn ($81m).

“The Sandbank project is further testament to Vattenfall’s strategy of consistently focusing our growth efforts on the expansion of renewable energy,” said Gunnar Groebler, head of Vattenfall’s Renewables Business Unit for its Continental/UK region. “We know how to work offshore and we see it as a significant building block in the success of the Energiewende in Germany.”

Vattenfall is the second largest offshore wind operator in the world, with 850 MW operational, or 12.5 per cent of global offshore wind power. à‚