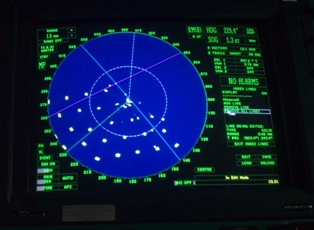 Swedish energy company Vattenfall has invested in innovative radar technology to enable it to go ahead with extending one of its offshore wind farms in the UK.

The system, called C Speed LightWave radar, is currently on trial at Manston Airport in Kent, England, which is the nearest airport to Vattenfall’s Kentish Flats offshore wind farm (pictured).

Kentish Flats was built in 2005 and comprises 30 Vestas turbines. Vattenfall wants to add a further 17 turbines to the site but there were concerns on the impact this would have on air traffic at Manston, which is mainly used by Dutch airline KLM to fly to The Netherlands, France, Italy and Portugal.

The airport is also to be used as a base by BA for its Airbus A380, the world’s largest passenger plane, where it will be used to train pilots and cabin crew.

Vattenfall’s solution was to contract C Speed to design and install its system at the airport, where it is currently gathering data. If it proves successful it will be the first time that a wind farm-capable radar has been installed, integrated and then submitted to regulator the Civil Aviation Authority for approval.

Vattenfall’s project manager for Kentish Flats, Goran Loman, said: “We gained consent for this scheme earlier this year on condition we tackle this radar issue effectively. Vattenfall is confident the C Speed system will mitigate the potential impact of our project on Manston Airport and we look forward to getting the condition discharged to allow the wind farm and the airport to safely co-exist.”

He added: “If this technology works, as we expect, it’s hoped the UK government will be satisfied this issue has been dealt with.”