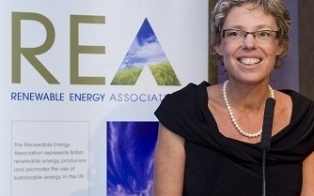 A survey by the Renewable Energy Association shows the industry has little confidence that the government’s approach will work, with two-thirds believing there was a strong chance the country will ultimately fail to reach its target of 15 per cent of energy coming from renewables by 2020.

Only a tiny proportion of the UK’s renewable energy companies believe the government’s new subsidy regime will succeed in boosting low-carbon power generation as planned, research has found.

Uncertainty about the measures is “crippling industry’s ability to look ahead and making it very difficult for banks to approve funding on projects”, said Steven Edrich of 2OC, a green generation company.

The UK was falling behind Europe and Africa “in terms of attractiveness for investment in new renewable generating technologies”, said Tim Jackson of Sinclair Knight Merz, the global engineering group.

But Gaynor Hartnell, REA chief executive (pictured) pointed out that the UK only gets 3.8 per cent of its current energy from renewable generators, meaning green energy consumption has to grow about 16 per cent a year to meet the 2020 target.

She added in an emailed statement that, “the UK has to achieve a higher growth rate than any other Member State in order to reach its 2020à‚ renewables target. Mixed messages remain a problem and industry needs policy certainty and political consistency. The prize is up to 400,000 jobs by 2020, economic growth and greatly improved energy security.”