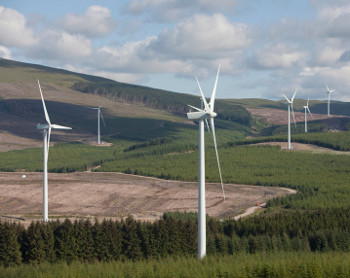 A proposed government plan to end the UK’s onshore wind subsidy scheme before its scheduled closure date has drawn fire from the industry.

Under the existing Renewables Obligation (RO) scheme, onshore wind projects built before March 2017 will automatically receive support. However, newly-appointed energy secretary Amber Rudd is reportedly considering an earlier end to the scheme in order to fulfil the Conservative government’s pre-election pledge to end new subsidies for onshore wind, which it says is unpopular with local communities due to its visual impact.

Under the proposal, subsidies for both RO-supported large wind turbines and small turbines, currently supported through a feed-in tariff, are expected to be cut.

A Department of Energy and Climate Change (DECC) spokesperson was quoted by newspaper The Telegraph as saying that “with the cost of supplying onshore wind falling, government subsidy is no longer appropriate”.

In order to meet European renewable energy targets, the UK will need to install 11-13 GW of onshore wind capacity by 2020. Of that amount, over 9.5 GW is already online or under construction, while projects amounting to an additional 5.2 GW have been given planning permission. According to the aforementioned DECC spokesperson, this means that there is already “enough onshore wind to contribute what’s needed” without the 7 GW in projects that are currently seeking planning permission. Under the proposed new rules, these projects would be evaluated individually by ministers who would allot cash on a case-by-case basis.

Ian Marchant, chairman of wind power plant operator Infinis Energy and a spokesperson for trade group British Wind, said the government’s plans “beggar belief” and that they would mean “not a single energy or large-scale infrastructure project in the UK will be safe going forward”.

“This initiative would affect British businesses which have put hundreds of millions of pounds at risk in planning and procuring renewable power generation infrastructure under the RO,” he continued, noting that the projects currently on track to come online by 2017 “were initiated during the previous decade in anticipation of having a reliable RO-framework in place until March 2017 as envisaged when the RO was introduced in 2002”.

Keith Anderson, CEO of utility ScottishPower, said an early closure for the RO would mean “a whole lot of people writing off literally millions of pounds of investment” and that “if you prematurely bring onshore wind to a halt you will end up costing consumers £2bn to £3bn ($3bn to $4.6bn)” because more costly sources of power would have to be built.

Anderson said his firm has been “spending money in good faith under the rules of the RO” and that “if you’re watching what you thought were agreed mechanisms being changed and taken away, that massively damages your confidence as to what you invest.”