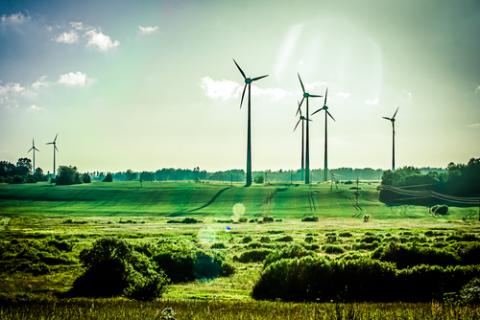 RenewableUK has released a warning that the UK is significantly off track to meet the level of onshore wind needed to achieve the legally-binding 2050 net zero emissions target.

New analysis from the industry body shows that without a change in policy, onshore wind capacity is expected to fall nearly 40 per cent short of the target by 2030.

There is currently just over 13.5 GW of onshore wind installed across the UK and the power it produces avoids over 14 million tonnes of greenhouse gas emissions every year.

The Committee on Climate Change advised Government that onshore wind capacity needs to expand by at least 1 GW a year to achieve our net zero emissions target, reaching 35 GW by 2035. This would require approximately 29 GW to be installed by 2030.

New analysis by RenewableUK’s Project Intelligence team shows that, on current trend, capacity will grow to only 17.8 GW by 2030. Reaching this level depends on 4.5 GW of new onshore wind farms being built without Government-backed contracts for new renewable power. Instead this new capacity would rely on Power Purchase Agreements with corporates or the merchant power price. Just under 1 GW (740 MW) would be re-powered, with older turbines replaced at the end of their life by new modern turbines.

In a lower growth scenario, onshore wind capacity would grow by only 1 GW in the next decade to just 14.5 GW by 2030, as the rate of new wind farm installations is outpaced by the retirement of older projects.

Only the high scenario in the analysis envisages significant growth in onshore wind with capacity growing to 24.4 GW. Reaching this level would require supportive policies from Government, including allowing onshore wind to compete for new Contracts for Difference, setting planning guidance for re-powering and enabling use of the most modern turbines.

Installation of new onshore wind turbines reached a peak of nearly 2.7 GW in 2017, before falling by 80 per cent in 2018 to the lowest level of new installations since 2011. The dramatic fall-off in new installations primarily due to policy changes implemented by Government after the 2015 election, including the closure of Contracts for Difference auctions to onshore wind.

Commenting on the new figures, RenewableUK’s head of policy and regulation, Rebecca Williams said: “We are on the eve of what should be the greenest election the UK has ever seen. Public demand for action to tackle climate change has never been higher and the next Government will have to deliver ambitious, credible plans that put us on track to meet our net zero emissions target.

“Onshore wind is the single largest renewable power source in the UK and you can’t be credible on net zero unless you’re serious about onshore wind. But without new policies, we won’t get anywhere near the levels needed for net zero. Growing our onshore wind capacity in line with the CCC’s recommendation will bring down consumer bills, and secure new investment and jobs in communities across the UK”.